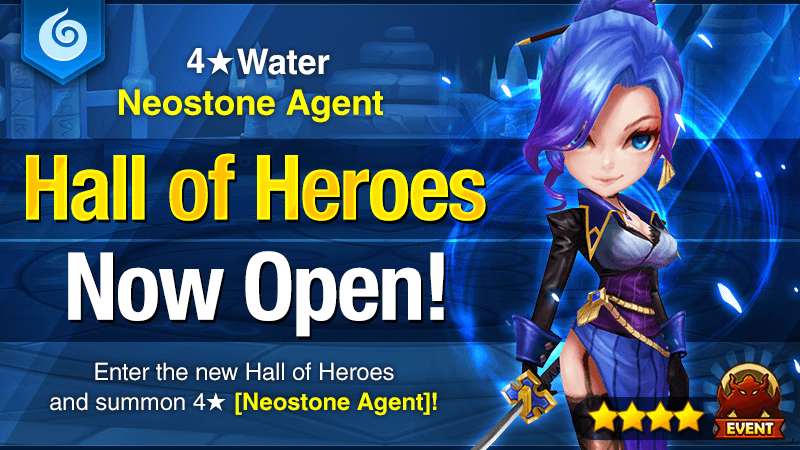 On Wednesday, August the 7th, 2019, the Hall of Heroes for the water Neostone Agent Emma was announced. This is actually a really good HoH, because not only is Emma viable on her own, but the Neostone Agents all need skillups to be useful.

Let’s cut the chatter and get on with it!

Yes, actually! While Emma herself has fallen out of use lately, she still is pretty good. Her third skill Medical Support heals all allies by 30% of her max HP, raising their defense for 2 turns. If they get fully healed by this skill or are already at full HP, they’ll have a 2-turn shield equivalent to half of the excessive amount healed.

She’s actually really good for newer players who need the extra heals, defense buff and even a shield when they’re just breaking into GB10. Like all the other Neostone Agents except Sylvia, though, she really needs skillups, because Medical Support is a disgusting 6 turns when unskilled. Thankfully, though, it goes down to 4 turns with full skillups.

For those who don’t need Emma, though, she makes great skillups for Olivia and Sylvia. Seriously, you should build an Olivia. Her cooldowns are stupid low when she’s skilled up (3 turns on her third, 2 turns on her second), and her kit’s nuts; a complete cleanse and attack bar fill-up on her second skill Briefing and one enemy getting hit with a 50% attack bar decrease before all her allies gain defense for 3 turns on her third skill. Basically, infinite Defense buff. 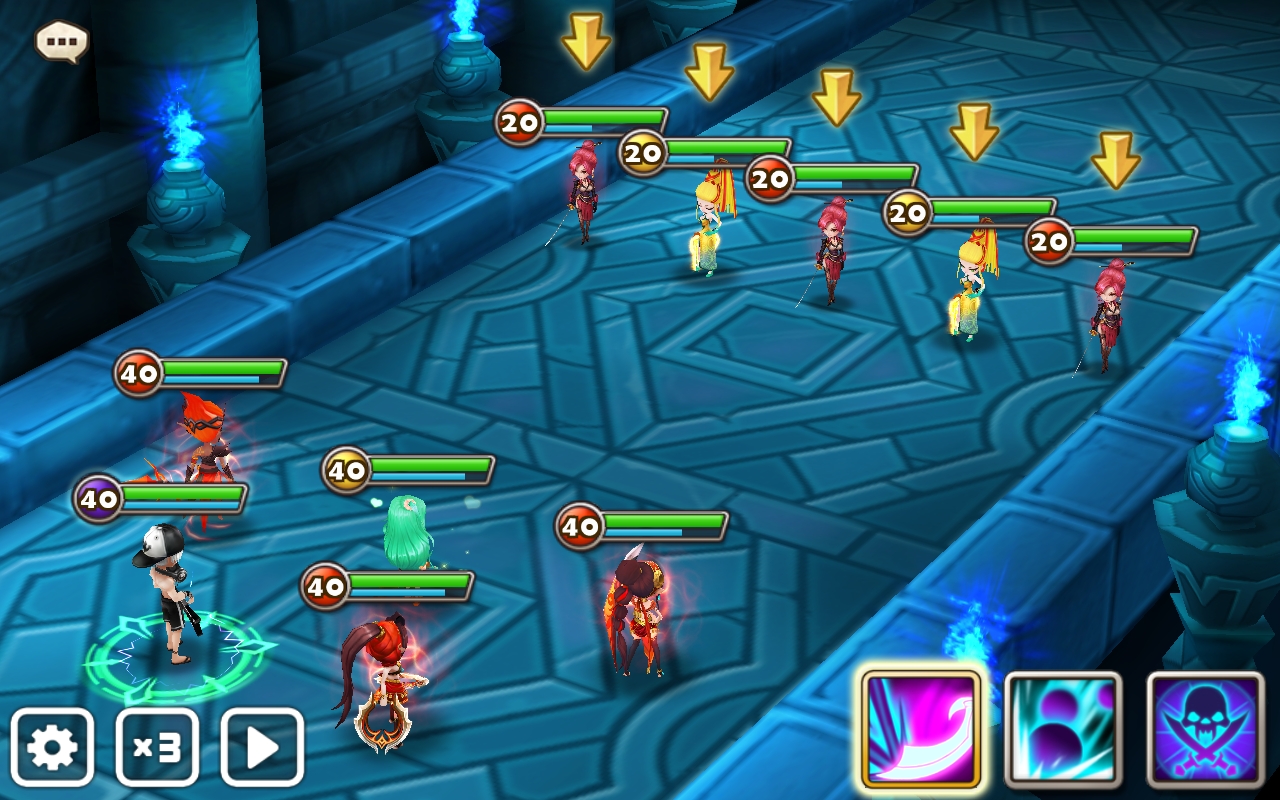 The Threat: So this one’s actually a two-fer of threats. Both Yen and Lisa are equally threats, but in different ways. Lisa’s third skill, Attack Command, will have her cleanse her allies of all harmful effects, and then four randomly selected allies (one of them being herself) will attack a specific target.

Yen, meanwhile, has a passive that gains her chances to get an additional turn, and the chance goes up the more turns she gets without activating her passive. It’s really not fun to deal with. Both Lisa and Yen are equally good on their own, but somehow this specific combo is quite a deadly one, especially in the higher levels of HoH.

The Solution: Bring AoE stunners to the table. Seriously, having at least one mon who can stun everyone is a gamechanger, especially in HoH and when you can’t just burst nuke everyone down. Someone like Veromos or any Chakram Dancer paired like Maruna works like an absolute charm here. And anyway, you should already have a Vero by now, if you’ve fused him to break into GB10. 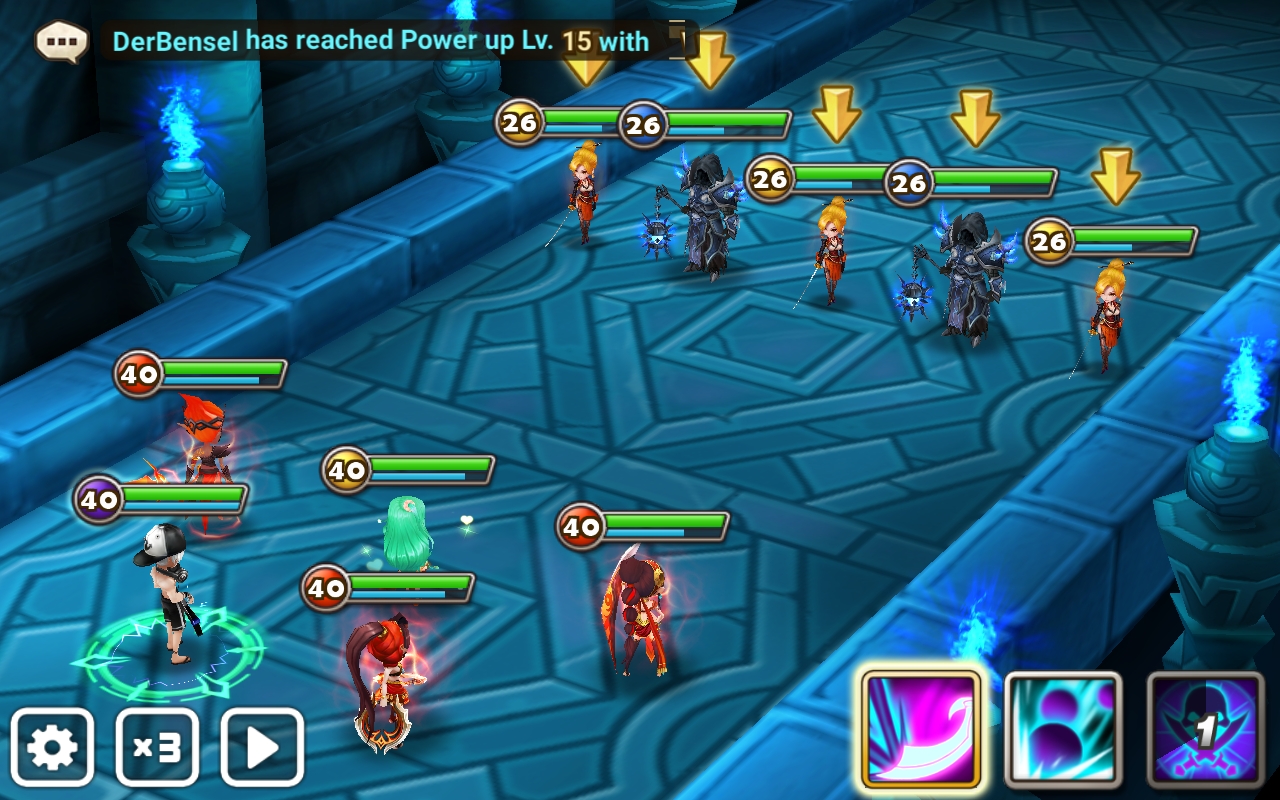 Do you know how much trouble I had taking the screenshot of Stage 2? For some reason, it just wouldn’t take the screenshot. I had to try at least ten times after I realized I didn’t get it the first time. Stage two has three Olivias (wind Neostone Agents) and two Fedoras (water Death Knights)

The Threat: This stage is mostly just support units, but Fedora can be annoying to deal with. His third skill, Decline, cleanses all harmful effects off of his allies, plants Endure on them all for one turn and Immunity for two turns as well.

And again, as mentioned in the section of “Is Emma Usable,” Olivia is just great in general. Her second skill? Complete cleanse on an ally and fills their attack bar to the max. Third skill? 50% attack bar decrease on an enemy and 3-turn defense buff on all allies. She’s like the anti-Galleon!

The Solution: Focus on Fedora first. Holy poo, I cannot stress how much I hated Fedora in stage 2. The worst part about it is that he always manages to first, so all the DoTs that I may have on everyone will be almost immediately cleansed as soon as he gets the turn. I hated him.

Anyway, once Fedora’s down, you can safely move on to fighting off Olivia. Her cleanse on her skill 2 is annoying to deal with, but ultimately it’s not that bad to fight. Let’s move on to Stage 3 once all five of the trash wave is dead and gone! 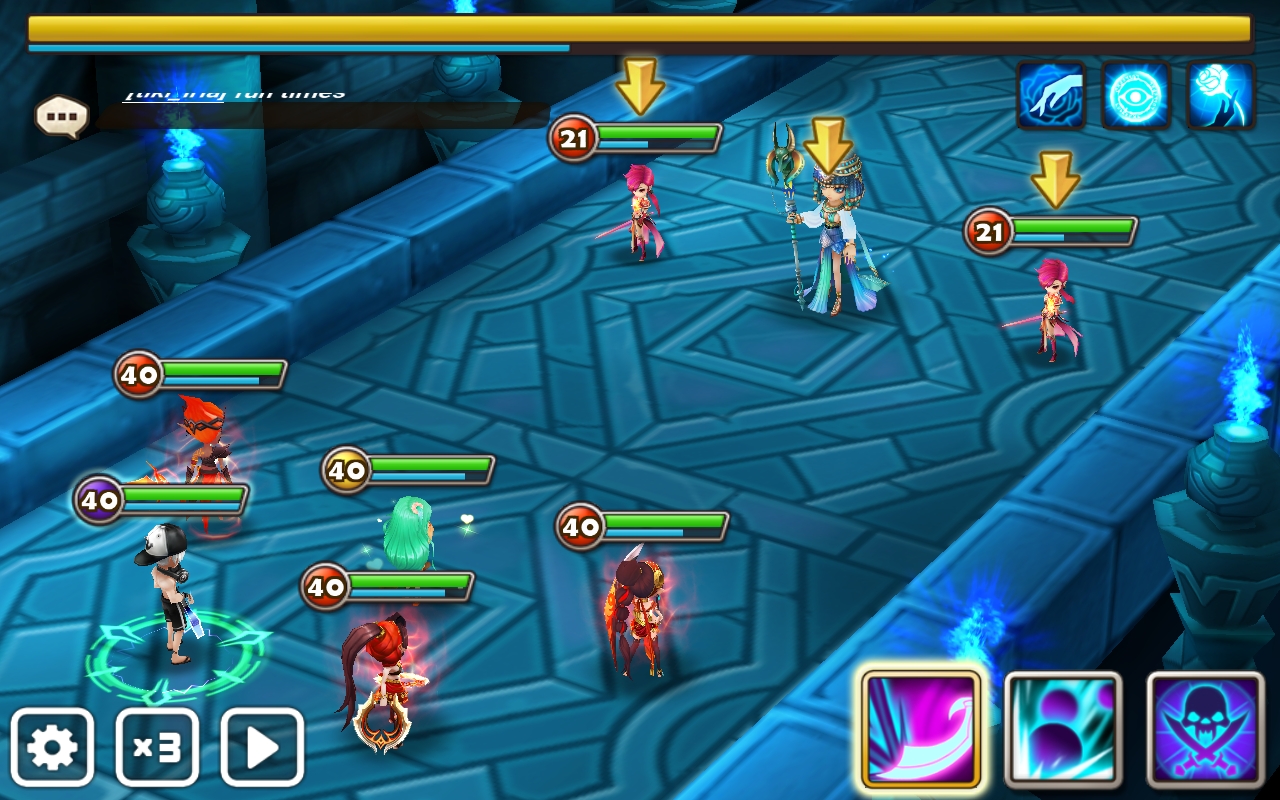 The Threat: This time, it’s definitely the lackeys who are the threat here, but Bastet is still annoying to deal with. Her third skill, Oasis’s Blessing, will create a 3-turn shield equivalent to her level on all allies, raise their attack power for 3 turns, and also increase their attack bars by 25%. Her second skill, Curse of the Beautiful, also attacks all enemies three times, decreasing their Defense, increasing their chances of landing a glancing hit and also healblocking them all for 2 turns.

Astar, meanwhile, is the damage dealer. Her first skill attacks all enemies, second skill hits three times and deals Silence, while her passive Vengeful Fire will increase her attack speed as her HP gets lower, and then deals 50% more damage if the enemy she hits has more HP than she does.

The Solution: Did you know that you can just focus on the miniboss or actual boss and completely ignore the lackeys? If you keep Astar stunned and Bastet silenced, she’s actually not that bad to take down. I swear, though, whenever she uses Oasis’s Blessing, it’s pretty much an instant loss for me. Plus the monsters in the higher floors of HoH can defy the laws of SW and go past level 40, so the shield gets stronger and stronger. 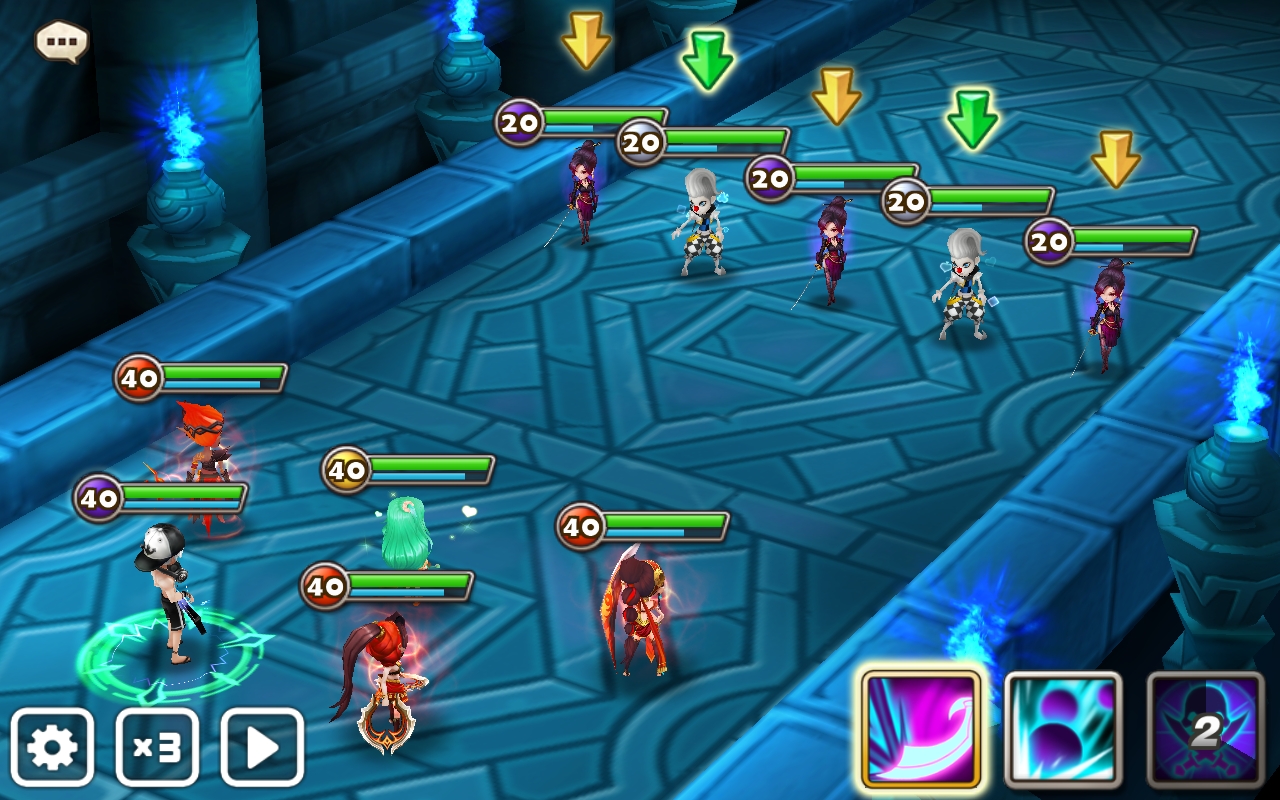 The Threat: The threat here is definitely Sylvia. There’s a reason why she’s the only nat5 in the Neostone Agent family, and it’s mainly because of her passive, Best Partner, in which she will automatically pair up with a randomly selected ally every time she attacks. She’ll also decrease the cooldown of the monster she attacks with. So that’s fun.

Figaro, meanwhile, was my first LnD lightning (after 3 years of playing) and was a HoH maybe two weeks after I got him. But anyway. His passive, Camouflage, gives him a 25% chance to cancel incoming damage, and he’ll also remove a beneficial effect from an enemy each time he attacks.

The Solution: Sylvia. Definitely kill Sylvia first. She will always pair up with someone every time she attacks, and if you’re unlucky, she’ll end up pairing up with a Figaro, who then strips buffs off of your allies. Figaro is annoying to deal with, due to the fact that one out of four attacks will usually be cancelled out, but he’s not nearly as bad as ol’ Sylvie here. 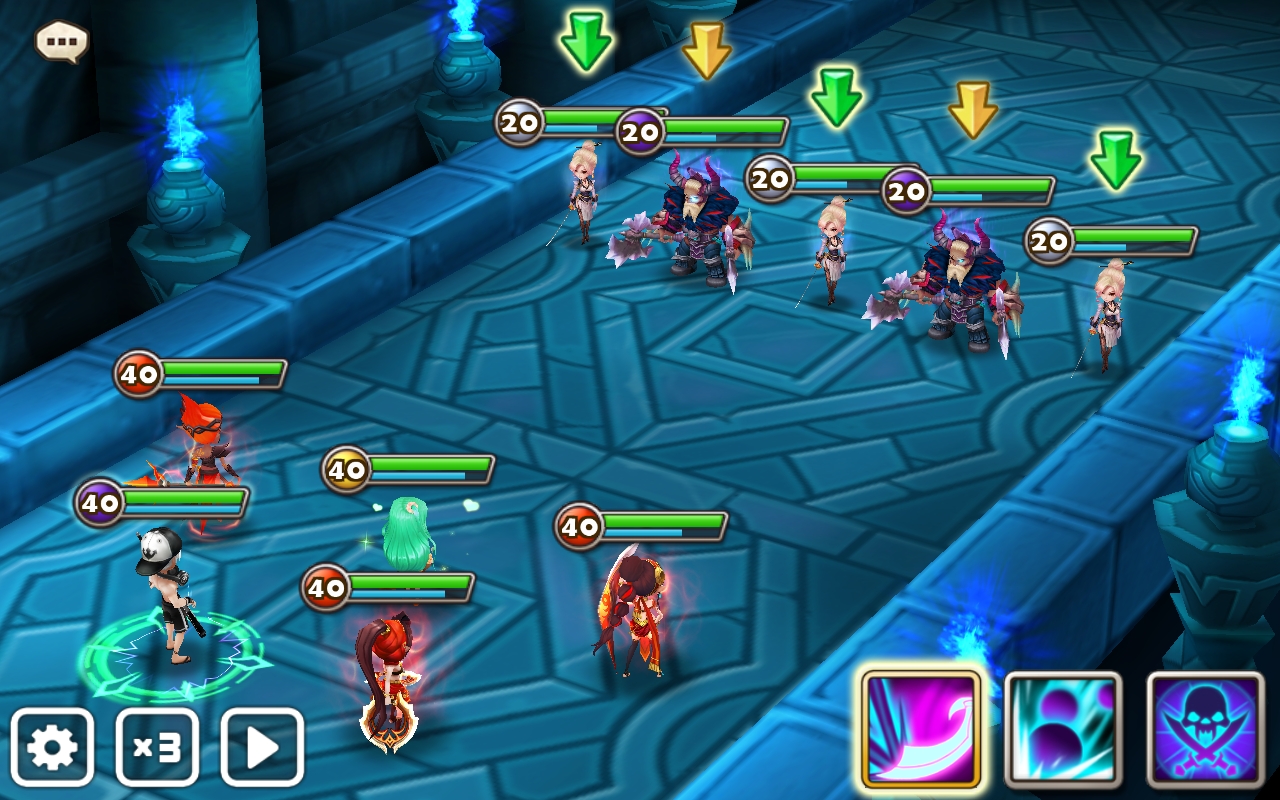 The Threat: Yeah, the threat here is definitely Hrungnir. His third skill Frenzy is absolutely nuts, I’m not gonna lie. Basically, it attacks an enemy target with massive damage, which instantly recovers a turn for him and then has a 40% chance to not go on cooldown. However, when Frenzy IS on cooldown, his attack speed increases an extra 35 speed, and he’ll heal himself for 10% of his HP at the start of every turn.

Illianna, meanwhile, is overall considered the worst of the Neostone Agents. Her third skill, Neostone Field, will make her target ally invincible for 2 turns, and all other allies will be hit with Endure for a turn. Despite being bad in the actual game, in HoH she becomes seriously annoying. It’s not fun to mess with her at all. Oh yeah, and she shares a second skill with Olivia. Whoopdy-doo.

The Solution: Go for Hrungnir first. Illianna may be an annoying support unit, but she can’t really do much if the biggest threats are all dead. Hrungnir is what kills your mons a good amount of times in Stage 5. I’ve maybe been killed once by an Illianna, and that was just a fluke. Make sure you keep all three Illiannas stunned, because you do not want her to make Hrungnir invincible. 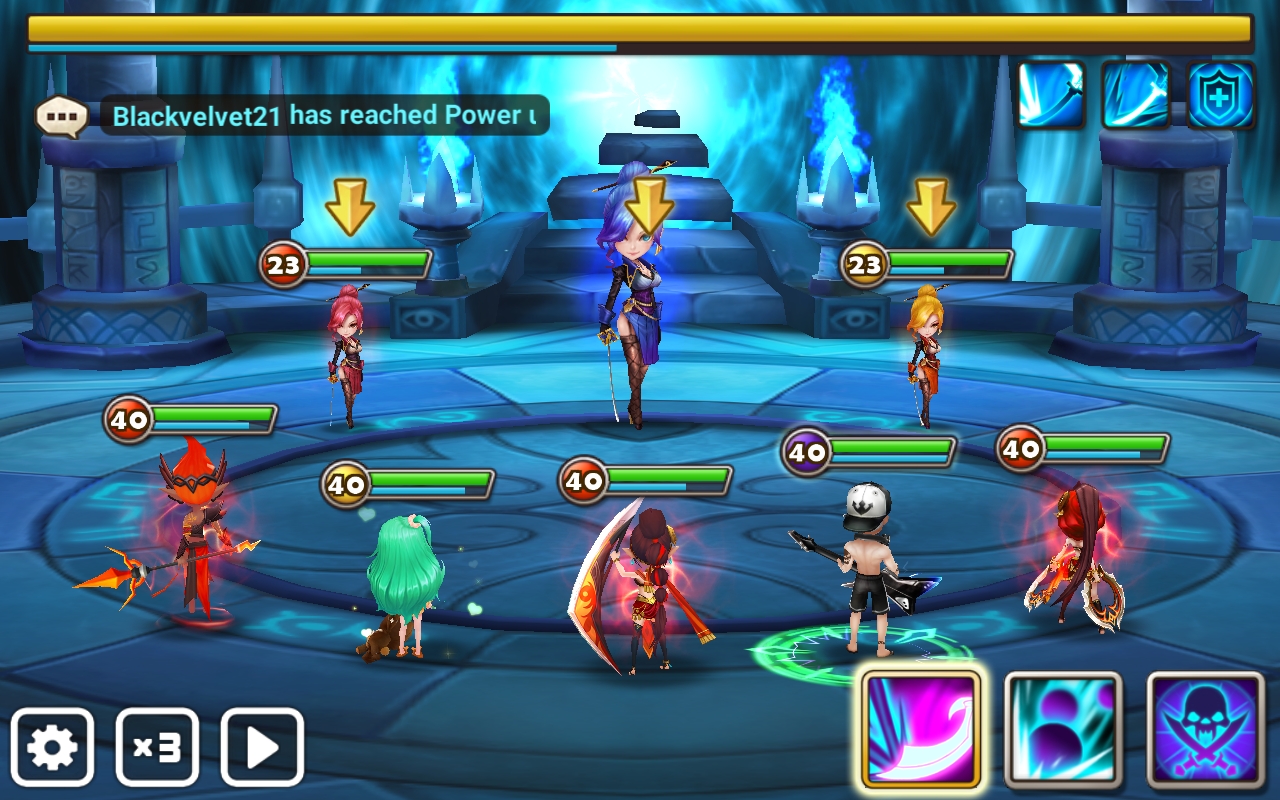 It’s boss time, people! Now, the boss floor of HoH will always have the most variety, because the element of the lackeys change with each floor. Here, though, the lackeys with Emma are Lisa and Olivia.

The Threat: The threat is always going to differ because the alckeys differ. In this case, though, the threat order from most to least would be Lisa, Olivia, and then Emma.

The Solution: In here, the solution would be to take out Lisa, stun Olivia, and then work on Emma. However, if you think you can just burst Emma down, then by all means, go ahead and do so – if you kill Emma, you won’t have to kill the lackeys.

Anyway, I hoped you all enjoyed this article and/or your new Neostone Agents! How far did you all get this month? I made it up to B8 and stopped there because Shaina and Maruna can only get you so far in a water environment. I’m Sara Ann, and I’ll see you in the next article!

Look for a confirmation email. In some rare cases this may take several minutes.

We have sent you an email with a password reset link.

We have sent you a new activation email.